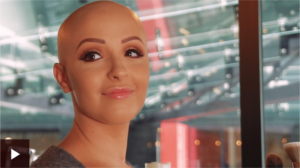 It aims to make the condition more accepted in the fashion world and give a platform to models with hair loss.

This clip is originally from BBC Radio 5 Live.

Texas woman with alopecia embraces ‘true self’ for engagement photos 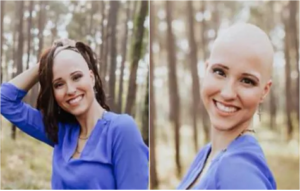 Texas woman with alopecia who posed for an engagement photo shoot without her wig says she is “incredibly thankful” for the outpouring of love she has received from strangers.

Makenzee Meaux, who was diagnosed with the hair-loss condition aged eight, described it as “probably the most difficult thing I will ever do in my life”.

“While taking our engagement photos I decided that it was time to stop hiding from the one thing I tried hardest to hide for almost 15 years and embrace in my true self,” she said. Read more about Makenzee Meaux here 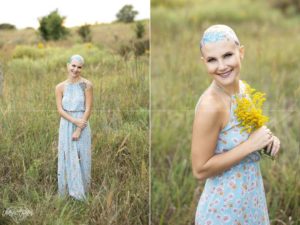 A 17-year-old with alopecia has stuck two fingers up to narrow beauty standards in a captivating photoshoot which sees her display her bald head with pride.

Madisyn Babcock, from Kansas, asked her mum, who is an artist, to paint flowers on her head for the shoot, which she hopes will raise awareness of the condition and “reclaim the beauty that society sometimes takes away from those with hair loss”.

The photos – taken by photographer Chelsea Taylor – are nothing short of stunning.

“I was truly astonished when I saw the results,” Madisyn tells HuffPost UK.

Discussing the striking floral arrangement painted onto her head, she adds: “It wasn’t about filling some kind of void or signifying that there’s something missing from those with hair loss, it was to embrace and embellish it.” Read more of this fantastic story here 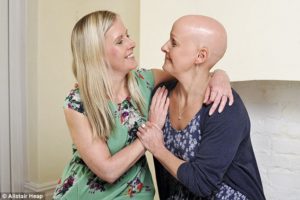 Gwen Thomas and her twin sister Elin are getting ready for a night out with friends. They exchange a flurry of excited questions as they spritz themselves with perfume and apply their makeup: ‘Which dress shall I wear?’ ‘Which bar shall we go to first?’
But beneath this scene of sisterly camaraderie lies an unspoken tension. An elephant in the room. Although Gwen and her sister are genetically identical, there is one marked difference that has threatened to tear them apart. Gwen suffers from alopecia. Her thick, glossy, blonde locks fell out in clumps over a sixth-month period when she was just 25. She has no hair on her body at all. No eyelashes or eyebrows.

Meanwhile, her sister’s hair, once a mirror image of her own, remains intact for her to blow-dry, curl or straighten as she chooses. Read More

WHAT IS ALOPECIA AREATA? Find out more by clicking here

Putting a brave face on taboo of hair loss

DIAGNOSIS: Liz Shiel was told the cause of her alopecia may be stress, but did not feel that her life was any more stressful than other lone parents 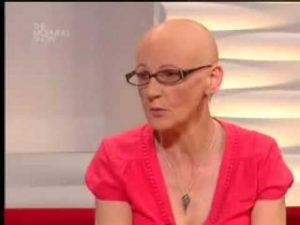 Parents say their children are bullied in school and often come home and ask if they’re ill as others assume they have cancer
It’s been almost 15 years since Liz Shiel lost her hair. Since then she’s worked in television, set up an online support network, and learned to rock a wig, but she’d still love nothing more than to go into a salon for a wash and blow dry.

In 1998 Liz noticed a bald patch on her scalp the size of a €2 coin, much like one she recalled having in her youth. Over the next few months, the patches began to multiply and she noticed strands of hair on her towels or around the house. By January 2000 she no longer had any hair on her head; three months later her brows and lashes came out too. “It was awful,” she says. “Really distressing. My whole face was gone, I could just see two little eyes poking out and I didn’t like what I saw. Read More About Liz’s Story Here

“I HEARD STORIES about women whose husbands had never seen them without a bandanna or wig.”
Alopecia is an autoimmune condition that results in varying degrees of hair loss from any part of the body.

Photographer Anthony Griffin says, “It can result in social phobia, anxiety, and depression, especially for women for whom a deep, personal relationship between hair and self-esteem has existed throughout history, philosophy and religion.”

Griffin began researching the condition when he decided to photograph women with alopecia for his final year project in college, An Uncommon Beauty. See the fantastic pictures Anthony captured

The Bald Truth, How we React to women with Hair Loss

ABRONZED beauty swishes her hair away from the camera, dazzling the viewer with her abundance of rich, glossy locks. Turning back, she self-assuredly says to the camera: “Because I’m worth it.” The message to women is insidious and double-edged; if you boast a silicon-slicked, preternaturally shiny mane, you are worth it. But the inverse is also true; if you don’t, you aren’t.

Alopecia areata causes partial or full loss of hair, and it can devastate women’s confidence and self-worth. They spend a fortune on expensive wigs, eyebrow tattoos, and false lashes to disguise their condition, while those who go bald in public are stared at and mistaken for cancer patients. Read more about how people react here

Alopecia – what causes it, and how can we treat it?

Alopecia affects half of men over the age of 50 and half of woman over 65, and also affects younger people. It can have devastating repercussions on the psyche. What causes the hair loss and what treatments are out there?

Imagine having no hair. Not by choice, and not just on your head. No eyebrows, no eyelashes, no body hair. And you can’t do anything about it. In our fixation with flawless perfection, a lack of a crowning glory can be a follicular fiasco; a confidence-zapping twilight zone nobody wants to be in.

Yet hair loss, or alopecia to give it its medical term, is so common it’s normal, affecting — as one strain of it does — 50% of men over 50 and the same percentage of women aged 65 and over. For them, genes or hormones result in progressive hair loss of the androgenetic alopecia type, which manifests as hair-thinning, or baldness of varying degrees. Rita deBrún finds out more.